Day 01: Arrive at Fortaleza airport – transfer to Icapui ( 200 km) in the eastern coast of the state of Ceará, where the main target will be Little-Wood Rail. The place is also good for migrant shorebirds from September to February..

Day 04: Early morning birding Quixada and transfer to Chapada do Araripe (500 Km – long drive). This is a plateau in the south of the state of Ceará. The region is rich in birds due the diversity of the habitats, the vegetation in the top of the plateau is a mixed of moist forest near the slopes, cerrado and caatinga. There are several springs along the foothills, with moist forest that is the only habitat for the amazing Araripe Manakin. In the dry vegetation of the top of the plateau we will also find many endemics such as Great Xenops, Silvery-cheeked Antshrike, Red-shouldered Spinetail, Caatinga Antshrike, Tawny Piculet, White-browed Antpitta, Caatinga Antwren, etc.

Day 07: Early morning visit to Lear’s (Indigo) Macaw roosting site (always fantastic!!!). After birding, come back for breakfast in the Reserve accommodations and a long drive (496 Km) to União dos Palmares (in the state of Alagoas), our base to bird Murici Reserve next morning. Birding evening in the hotel gardens.

Day 08: Cross the fingers for NO rains as the roads to the Reserve can be dangerous (muddy and slippery) if it’s wet. Leave hotel 4 AM for + – 2 hours’ drive to the forest. We will search for some of the rarest birds in Brazil. In the beginning of the 1980’s, four new species for science were described from here: Alagoas Foliage-gleaner (probably extinct), Alagoas Antwren, Alagoas Tyrannulet and Orange-bellied Antwren. Other targets/rarities are White-collared Kite, Seven-colored Tanager, Pernambuco foliage-gleaner, Black-headed Berryeater. Scalloped Antbird, Golden-spangled Piculet (local race), White-shouldered Antshrike (local race), White-throated Spadebill (local race), Black-cheeked Gnateater and others. Night in União dos Palmares.

Day 10: Birding near Tamandare AM. If we still need White-collared Kite here is another good place to try. Other targets include Forbes’ Blackbird, Pinto’s Spinetail, Smoky-fronted Tody-Flycatcher. PM transfer to Estancia (500 Km – another long journey) in the state of Sergipe. Stopping on route for Pectoral Antwren in case we still need it.

Day 11: Bird early morning in a forest fragment near the coast. The highlights here is the rare Fringe-backed Fire-eye. Other specialties are Sooretama-Slaty Antshrike, Stripe-necked Tody-Tyrant and again chances to find rare raptors as White-collared Kite and Rufous Crab Hawk. After birding we have a long drive to Chapada Diamantina in the state of Bahia (+ – 7 hours’ drive). Night in the nice town of Lencois.

Day 14: Birding São Desidério AM and transfer to São Domingos (220 Km) in the state of Goiás, stopping on route for some Cerrado specialties as Chapada Flycatcher. New chances for Horned Sungem. Our main target in São Domingos area will be the restricted Pfrimer’s Parakeet. Other targets in the area include Jandaya Parakeet, Helmeted Manakin and others Cerrado – Dry-forest specialties

Day 15: Bird the Terra Ronca State Park (very nice gallery and dry forest along limestone formations) in the morning for Pfrimer’s Parakeet and transfer (420 Km) to Bom Jesus da Lapa, back in Bahia, where we will look for Bahian-Nighthawk flying over Corrente river in the end of the day.

Day 16: Leave Bom Jesus da Lapa early morning and drive towards Boa Nova (480 Km) stopping on route (after + – 100 Km) to bird Caetite area for Minas Gerais Tyrannulet and other Caatinga specialties in case we still need. Arrive in Boa Nova PM. Boa Nova is located in the southwest of Bahia state where the Montane Atlantic forests meets the Caatinga. The region is home to over 400 bird species including the restricted Slender Antbird and Narrow-billed Antwren, both confined to a small area of eastern Brazil, a transitional area with dry vegetation known as “mata-de-cipo”. In less than 20 minutes of driving we leave the dry forest to a lush Atlantic forest, where we bird for species such as Striated Softtail, Bahia Spinetail, Rio de Janeiro Antbird, Fork-tailed Tody-Tyrant, White-collared Foliage-gleaner, Pin-tailed Manakin, Pallid Spinetail, Ferruginous Antbird, Gilt-edged Tanager and several more Atlantic Forest species. There’s a good site for Giant Snipe.

Day 18: AM Birding Boa Nova (if necessary) and transfer to Serra Bonita Reserve, stopping on route to Bahia Tapaculo, a Critically Endangered species that lives in a very small portion of the lowland Atlantic Forest of Bahia, north from Jequitinhonha river.
Day 19: Full day birding Serra Bonita Reserve. The Serra Bonita Reserve is a pioneering, innovative private conservation enterprise, protecting submontane forest in Southern Bahia. It aims to protect the Brazilian Atlantic Forest through a consortium of several rural property owners, whose properties contain RPPNs (private reserves). Altogether, currently they protect 2,500 ha – the second largest privately protected area of the Central Biodiversity Corridor of the Atlantic Forest.
The RPPNs contained in each property are managed by Instituto Uiraçu, through agreements with the owners. In addition to managing these private reserves and its own, purchased through donations, the Institute aims to extend the protection to the entire Bonita Serra, one of the last remnants of submontane forest in the region, which covers an area of about 7,500 hectares in the municipalities of Camacan and Pau Brasil, Bahia.
Some of the main targets are the unique Pink-legged Graveteiro, Bahia Tyrannulet and many more rarities as Plumbeus Antvireo, Salvatori’s Antwren; the rare Atlantic race (to be split) of Rufous-brown Solitaire, Atlantic Birds as the beauty Blue Manakin, Eastern-striped Manakin, Spot-backed Antshrike, Spot-billed Toucanet, Sombre Hummingbird, etc. They have feeders for hummers and Tanagers (Red-necked, Green Headed, Golden-chevroned, Azure-shouldered Tanagers are some frequent visitors).

Day 20: transfer (200 Km) to Stresemann’s Bristlefront Reserve. This is the area where the enigmatic Stresemann’s Bristlefront was recently rediscovery. The American Bird Conservancy and its Brazilian partner Fundacao Biodiversitas have acquired almost 1,000 acres of this unique and isolated stand of Atlantic Forest to save that site, one of the greatest biodiversity hotspots in South America. Besides the mega-rare Stresemann’s Bristlefront, many others endemics occurs in the area, as Three-toed Jacamar, Maroon-faced Parakeet, Plumbeous Antvireo, Rio de Janeiro Antbird, Bahia Spinetail, etc.

Day 23: Bird Veracel AM if necessary and transfer (450 Km) to Linhares (Vale Reserve). This extension is offered in partnership with Gustavo Magnago, an excellent guide resident in Espirito Santo.

The private VALE Reserve and the adjacent federal-owned Sooretama Biological Reserve protect the largest remnant of Brazil’s southeastern Atlantic coastal lowland rainforest. This area is one of the only sites where one of the world’s rarest cracids, the Red-billed Curassow, can still be found. Other species that are considered endangered or vulnerable in this area include White-necked Hawk, Blue-throated (or Ochre-marked Parakeet), Red-browed Amazon and Black-headed Berryeater.
Besides the endangered species, there are many other great birds to see in this location such as White-winged Potoo. Maroon-faced Parakeets, Black-capped Screech-Owl, Least Pygmy-Owl, Minute Hermit, White-chinned Sapphire, Black-necked Aracari, Blond-crested, Ringed, Red-stained, Yellow-fronted, and White Woodpeckers, Rufous-capped Antthrush, Black-cheeked Gnateater, Screaming Piha, Red-headed, White-crowned and White-bearded Manakins, Thrush-like Schiffornis, Grayish Mourner, Long-billed Gnatwren, Yellow-backed Tanager, Red-crowned Ant-Tanager, Yellow-green Grosbeak…

Day 25: transfer to Santa Teresa. Bird PM. The small town of Santa Teresa was the home of Dr Augusto Ruschi, a world authority on hummingbirds. In this location, we spend plenty time at our accommodations, which is a great place to watch hummingbirds coming to feeders. Here we are able to see up to 10 species of hummingbird in one day! We see from the endemic insect-sized Frilled Coquette to the large Swallow-tailed Hummingbird. The forests around here are also full of special birds. The higher altitude and humidity mean that the forests are dense and full of epiphytes, and this is one of the few places that the rare Wied’s Tyrant-Manakin can be found.

Day 26: Bird Santa Teresa AM and transfer to Vargem Alta (+- 3 hs drive). This outstanding forest remnant, linked to some other forest fragments, is nowadays the only known site with recent records of the beautiful and ultra-rare Cherry-throated Tanager. Finding any of the few surviving individuals is a challenging task, and our chances are not high, but it is surely a memorable and most rewarding moment when it does happen.
This amazing site is not just important for the Cherry-throated Tanager, for there are several other spectacular species living here, including stunning rarities such as the poorly known Brazilian Laniisoma, and great endemics like Such’s Antthrush and Cinnamon-vented Piha, White-bibbed and Ochre-rumped Antbirds, Star-throated Antwren, Pale-browed Treehunter, White-breasted Tapaculo, Hooded Berryeater, Pin-tailed Manakin and Brown Tanager. Other birds we could see are Red-breasted Toucan and Saffron Toucanet, Sharp-tailed Streamcreeper, Rufous-breasted Leaftosser, Rufous Gnateater, Variegated Antpitta, Swallow-tailed Manakin, Wing-barred Piprites, Ochre-faced Tody Flycatcher, Long-tailed Tyrant, Greenish Tyrannulet, Rufous-crowned Greenlet, Uniform Finch and the Sharpbill.

Day 28: AM birding Vargem Alta and transfer to Vitoria (capital of the state of Espirito Santo). *Be sure to book flights at night or for the next day. 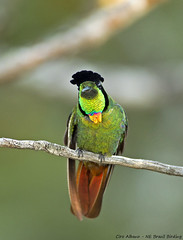 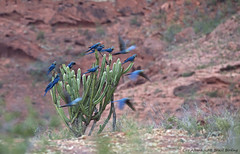 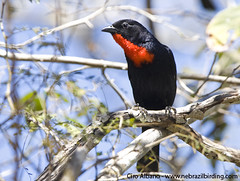 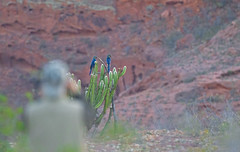 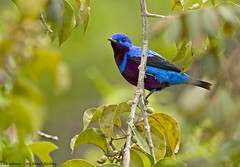 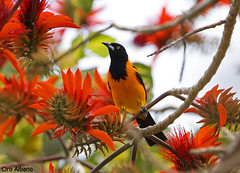 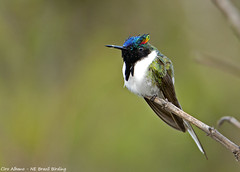 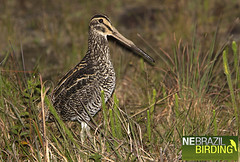 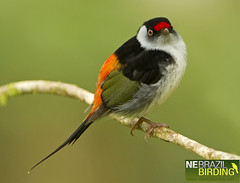 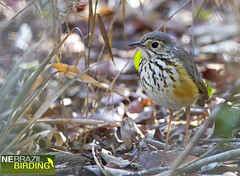 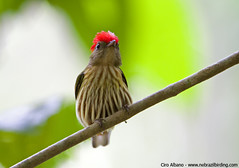 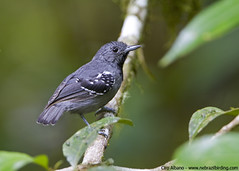 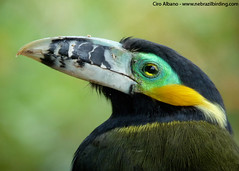 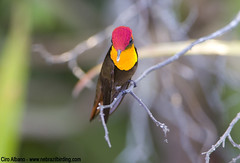 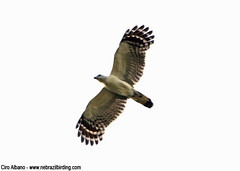 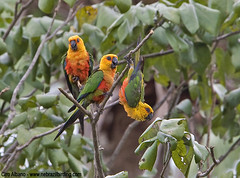 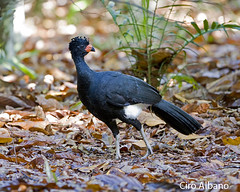 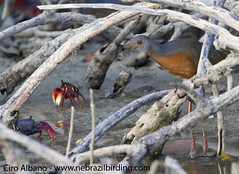